Who is the best Doctor Who?

Time (lord) to answer that age-old question, who is the best Doctor from Doctor Who? We've put together a list of all 13 Doctors to date, ranked from worst to best in our telly expert’s humble opinion. Do you agree with our rankings...?

The many Doctors of Doctor Who

The iconic sci-fi show has been running since 1963, and has been able to keep going because Time Lords regenerate rather than die, meaning every few seasons we get to know a whole new Doctor. Even the old rule that the Doctor can only regenerate 12 times has now been scrapped, which is great for us because it means the iconic Time Lord will hopefully stay on our tellies for years to come! Speaking of...

That’s right, it was recently announced that the 14th Doctor will be none other than Ncuti Gatwa, who many of us know from Netflix's Sex Education where he plays the charismatic and oh-so-loveable Eric Effiong, for which he was nominated for the Bafta for best male performance in a comedy programme three years in a row, and has won a Scottish Bafta and Rose d'Or Award.

Ncuti will make his first appearance as the Doctor in 2023, taking over from Jodie Whittaker who played the first female Doctor from 2017 - 2022.

Born in Rwanda but growing up in Scotland, the 29-year-old Gatwa will be the first person of colour to play the iconic role. On the news, Gatwa said,

"It feels really amazing. It's a true honour. This role is an institution and it's so iconic." He went on to say that the role of the Doctor "means a lot to so many people, including myself...I feel very grateful to have had the baton handed over and I'm going to try to do my best."

Showrunner Russell T Davies expressed his excitement with the casting saying he was blown away by Gatwa's "blazing" audition:

"It was our last audition. It was our very last one. We thought we had someone, and then in he came and stole it. [...] I'm properly, properly thrilled. It's going to be a blazing future."

The announcement came after much speculation on who the new Doctor would be, with some suggested names including Ben Whishaw, Michael Sheen and fellow Sex Education actress Rakhee Thakrar. With Ncuti Gatwa's signature charm, flair and impeccable comedic timing, we have no doubt he'll bring something new and exciting to the long history of Time Lords.

But before we look forward, let’s take a look back in time at the Doctors we've had so far...

Although Colin Baker’s incarnation of the Doctor is one of the most visually memorable due to his vibrant jacket and question mark collars, the sixth Doctor hasn’t become one of the better loved incarnations of the role. The show had a general decline in the mid-80s after an 18-month hiatus which meant Baker only had a few episodes to shine in – plus his character was sharper than the more jolly and friendly versions which had come before him, and had an angry temper which was at odds with his flamboyant fashion sense. While later Doctors have found a balance for the darker side of the Doctor’s personality, Baker didn’t have the time to flesh out his version of the Doctor, which is why we’ve put him towards the back of our list.

The Eighth Doctor is a bit of a tricky one because he was on our screens for the shortest amount of time. Played by Paul McGann, the Eighth Doctor appeared in a TV film which was intended to relaunch the series, but McGann’s role was short lived when the new series was scrapped. Simply because we didn’t get to see more of him, the Eighth Doctor gets position 12 on our list.

Thankfully though, we got to see McGann return briefly for the Day of the Doctor special as he transformed into the War Doctor (played by John Hurt, see our special mentions below...)

Pertwee was the first Doctor to appear in colour, and matched his braininess with his combat style of Venusian aikido which added some more action to the character. This Doctor was exiled to earth, working at UNIT as an advisor and introducing classic characters like the Master to the series, but we still can’t say he’s our favourite...

The Seventh Doctor is hard to judge too because he was the last before Doctor Who left our screens until it’s brief revival with McGann’s Eighth Doctor in 1996. That said, McCoy was definitely a bit of a love-him-or-hate-him sort of Doctor, but gave a great, nuanced performance. He was both silly and serious depending on the situation, jumping from spoon-playing quirky to a darker persona as someone who toppled empires, all in a pretty mad assortment of clothes (which he actually pulled off pretty well.)

William Hartnell’s portrayal may not be the most memorable, but he’s undeniably important to the series as the very first Doctor, introducing the world to the now legendary time traveller. Hartnell’s Doctor was serious and pretty cold compared to the quirky Doctor’s we’ve had since, but he still was a huge part of building an audience for what’s becoming one of the longest running TV shows in history.

Troughton had a tough role as the first regeneration of the Doctor, filling the boots of William Hartnell and setting up the now well-known trope of the Doctor regenerating every few seasons. However, Troughton made the role his own, creating a more playful and fun persona than his predecessor, coming across as an eccentric, enthusiastic professor which now very much fits the idea we have of the Doctor today.

If Doctor’s can be separated into the “quirky” and the “serious”, Smith is definitely in the quirky camp. His zany version of the Doctor, in his fez and tweed suit, was here for the 50th anniversary of the show and gave a light-hearted take on the Doctor which was endearing, but also not quite as impactful during the darker storylines Stephen Moffat brought to the show.

Peter Capaldi took on the role of what would’ve been the “final” Doctor if they’d stuck with the original lore (thank goodness they didn’t!) A huge change from Matt Smith’s wacky portrayal, Capaldi was a gruffer, sterner version of the Time Lord, though he balanced this out with sonic sunglasses instead of the classic screwdriver and a few other quirky traits. He added some real gravitas to the role which worked for a Time Lord on his 12th regeneration, and would be higher up on the list except that his episodes didn’t have as many fan favourites as others, although his penultimate episode (Heaven Sent) has to be one of the best ever episodes of the show.

It was never going to be easy picking up where Tom Baker left off, but Peter Davidson has become one of the best-known Doctors. His Doctor was charming, measured and warm, taking a different tack from many other actors who opted for more intense personas. He had a huge following, and his impact on the show has continued as his daughter, Georgia Moffat, but played the Doctor’s daughter Jenny AND married David Tennant, the tenth Doctor, in real life.

While some fans weren’t into the idea of a female Doctor, Jodie Whittaker’s performance so far has more than proved any naysayers wrong. Whittaker’s sunny, exuberant depiction makes her immediately likeable, and we’re sure her final season will give us even more reason to love Jodie Whittaker’s Doctor.

Although he only played the Doctor for one season, Eccleston reintroduced the show to a new generation of watchers as the series was finally (successfully) renewed. With his Irish accent and wild, frantic energy, Eccleson perfectly embodied a Time Lord who was the sole survivor of the Last Great Time War, with a surprising sense of humour and wild bursts of temper which bordered on frightening, Eccleston was one of the most interesting and memorable depictions of the Doctor, and one which left us wanting more.

With his striped scarf, hat and love of jellybabies, Tom Baker’s Doctor may be the most recognisable of all 13 – and the fact he played the Doctor for seven years means he spent longer in the role than any who came before or after. His quick wit and solemn version of the Doctor was loved by fans, and his time on the show solidified the tone of Doctor Who with a mixture of horror, action and wackiness which we love. When many of us think of Doctor Who, we think of Tom Baker, and he would have got the top spot on the list if it wasn’t for...

Ushering in a Golden Age of Doctor Who, David Tennant is takes the number one spot. Widely considered the most popular Doctor ever, Tennant brought a whole new audience to the already beloved show. His pinstripe-suited-Converse-wearing Doctor combined all the elements of the Doctor we’d seen before in the best way to create a perfect balance between zany and serious. Plus, it didn’t hurt that in his five years in the role the show had some of the best episodes and characters ever, including Blink, The Impossible Planet and countless others. Plus, his almost romance with Rose added a depth to the character which we hadn’t seen before.

Ultimately, for most of us, it is whichever Doctor we grew up with that holds a special place in our hearts as the "best" Doctor... So who is your pick?

Special shout out to John Hurt as The War Doctor who appeared for the 50th anniversary episode as a version of the Doctor who travelled between series eight and series 9, still trying to save Gallifrey during The Time War. Also an honourable mention to Jo Martin who played The Fugitive Doctor, the second female Doctor and the first person of colour to play the Doctor. We don’t know when the Fugitive Doctor is from, she’s a mysterious figure who we meet as part of the Timeless Child storyline and a tantalising glimpse into the Doctor’s endless life. 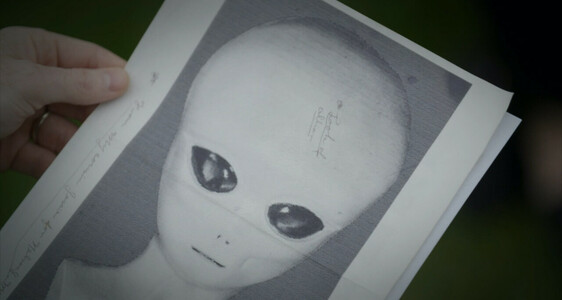 Entertainment
UFO week on BLAZE will uncover what lurks in the skies...