Following us binging Buffy the Vampire Slayer over the summer, E4 is giving us some more Joss Whedon goodness to sink our teeth into. That’s right - the Buffy spinoff, Angel, is coming to E4, starting Monday 21st September at 12am.

Angel is Buffy the Vampire Slayer’s dark spinoff, and follows Buffy’s brooding ex, Angel, (David Boreanaz) as he moves to L.A. to fight the forces of evil. The vampire with a soul is joined by other familiar faces from Sunnydale, including the straight-talking Cordelia Chase and the disgraced ex-watcher Wesley Wyndam-Pryce. In fact, Buffy the Vampire Slayer and Angel run in parallel on the same timeline, with Angel often popping up in Sunnydale and Buffy characters showing up in L.A. at crucial moments in the timeline.

Die-hard Buffy fans will also spot a few cameos, including Willow, Oz, and in later seasons Harmony and Spike, who become reoccurring characters. To celebrate the show coming to E4, here are the top Angel/Buffy crossovers for you to look out for. 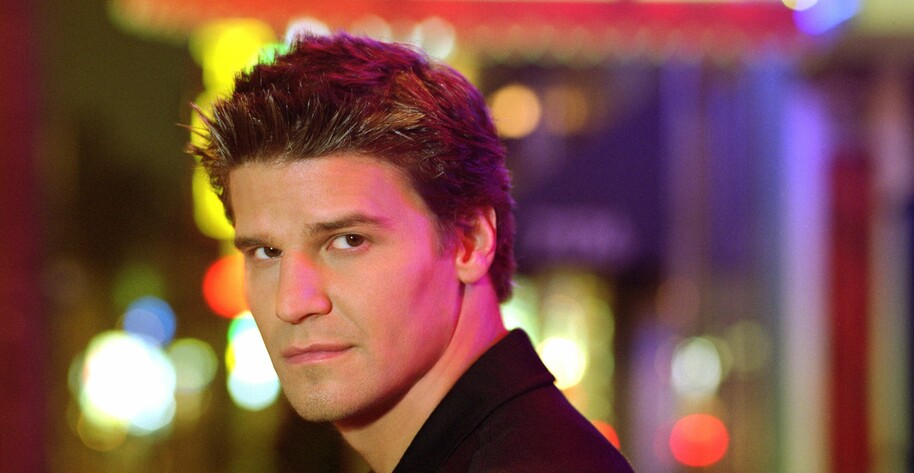 Although this wasn’t such a biggie in Angel, it was absolutely vital to the Buffy finale. Angel comes into possession of an amulet through the evil law firm Wolfram & Hart in Home (S4, E22), who have big plans for an apocalypse of their own. Angel takes this amulet to Sunnydale for Buffy’s penultimate episode End of Days (S7, E21) which continues into the finale episode, Chosen (S7, E22). He gives Buffy the amulet and offers to be the one to use it, but then finds out about Buffy’s relationship with Spike, and that he’s no longer the only vamp around with a soul. Bit of a tough visit for Angel. Spike ends up using the amulet, sacrificing himself to save the day and defeat The First. BUT, lucky for us, this isn’t the end of Spike as James Marsters moves over to Angel to season 5 as a kind of ghost.

2. The Bachelor Party/Pangs/I Will Remember You 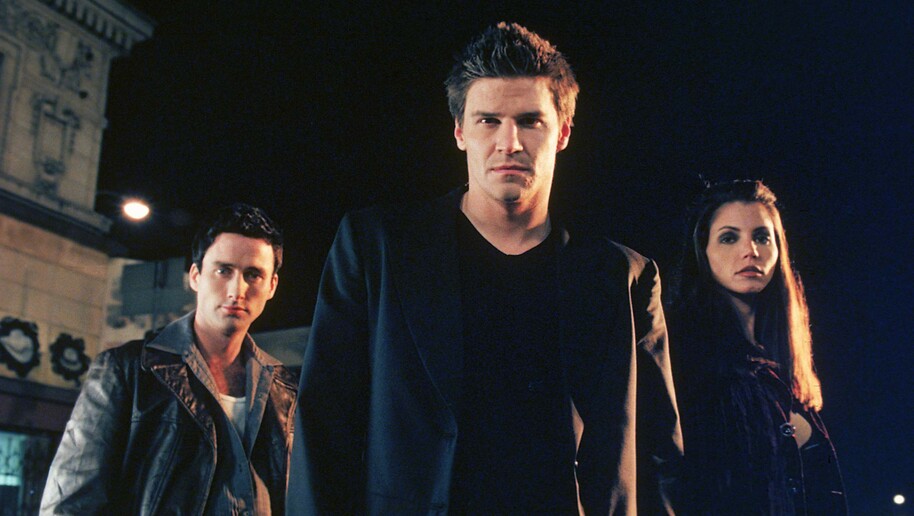 Right at the end of The Bachelor Party (Angel S1, E7), Doyle has a vision of Buffy fighting for her life, prompting Angel to rush to Sunnydale in Pangs (Buffy, S4, E8) to watch over her. This is a great episode in its own right where the spirit of a vengeful Native American returns to Sunnydale at Thanksgiving to exact vengeance for his people. There’s tons of funny moments in this episode, made even better by Angel keeping to the shadows, meaning the whole Scooby Gang (and even Spike, who has freshly joined the gang and spends the episode tied to a chair), knows Angel is around, leaving Buffy in the dark. At the end of the episode, Xander lets slip that Angel had been in town, giving the game away.

Immediately following Pangs, I Will Remember You (Angel, S1, E8) begins with an angry Buffy following Angel to L.A. after missing him on Thanksgiving. In the episode, an attack from a Mohra demon transforms Angel into a human – the thing that both Angel and Buffy always wanted. They share an intense kiss in the daylight, and at last, it seems like they can be together – but that’s not Joss Whedon’s style. Angel feels his humanity comes at a price, meaning he can no longer save lives in the way he can as a vampire. So, of course, Angel makes the ultimate sacrifice by convincing The Oracles to reverse time to stop the demon turning him human. The hardest part of this is that while Buffy forgets the whole thing, Angel is left with the memory of the life that he could’ve had with Buffy as a mortal 💔

We all knew that a coma wouldn’t stop Faith for long. The bad girl slayer is one of the best characters in the whole series, so we were relieved when Joss Whedon brought her back to create a little more chaos before her ultimate redemption. In Who Are You? (Buffy, S4, E16), Faith returns and is able to switch bodies with Buffy. She almost escapes as Buffy, while Buffy is taken by the Watchers Council, who believe she is Faith – I know, it’s a tad confusing. At the last minute, Faith (in Buffy’s body) can’t resist helping out with a vampire hostage situation, giving Buffy time to find her and reverse the body swap. Faith is shaken up by her time as Buffy, but is able to escape before Buffy can stop her.

Faith disappears from Sunnydale and turns up in L.A. for Five By Five (Angel, S1, E18) and is given the task to kill Angel by Wolfram & Hart. To lure Angel to her, she kidnaps Wesley, who was briefly her watcher in Sunnydale and brutally tortures him. Angel finds her and they get into a serious fight, but Faith suddenly breaks down, revealing that she wants Angel to kill her.

This storyline continues in Angel S1, E19, Sanctuary. Angel has always had a soft spot for Faith. Despite Faith’s crimes, Angel is still determined to save her soul. So, when Buffy and the Watchers Council shows up to find her, Buffy and Angel clash in a way they never have before. Ultimately, Faith turns herself over to the police, but Buffy and Angel part on bad terms.

Buffy returns to Sunnydale, and of course, Angel follows her to make amends in The Yoko Factor (Buffy, S4, E20). This leads to Angel meeting Buffy’s new (super boring) military boyfriend Riley, which is about as tense as you can expect, though also pretty funny. Angel and Buffy sort things out and make peace, but it’s obvious to both of them that something has shifted between them now. Although more crossovers happen with other characters and Angel would return to Buffy the Vampire Slayer, Buffy (Sarah Michelle Gellar) never makes an appearance in Angel again. 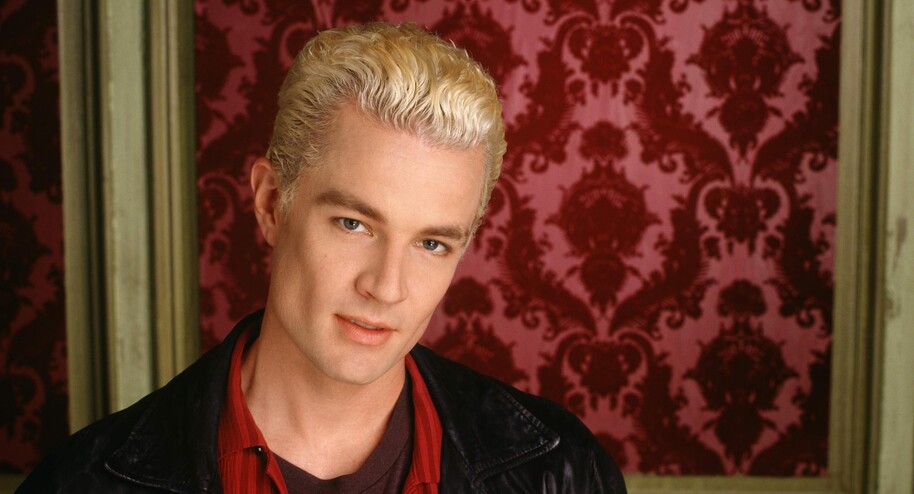 The flashbacks in Buffy the Vampire Slayer and Angel are always something to look forward to. In Fool For Love (Buffy, S5, E7), Spike gives his first real account of his backstory to Buffy, who wants to learn how he killed two slayers. He runs through his transformation by Drusilla in Victorian London and how he joined her crew with Angelus and Darla.

Parallel to this backstory is Darla (Angel, S2, E7), an episode dedicated to the backstory of Angel’s sire. Darla was killed in the very first season of Buffy, and though she appears in occasional flashback episodes, we haven’t previously got to learn much about her other than the fact that she was The Master’s favourite. But in a twist, it’s revealed that Darla has been resurrected by Wolfram & Hart, meaning we get to learn more about Angel’s mysterious sire.

It turns out Darla was sired by The Master himself, and then we learn more about her relationship with Angelus. Darla and Angelus are seen through Spike’s eyes in Fool For Love where the couple seem tense, but it’s assumed that it’s because of Spike’s attention-grabbing behaviour. We find out in Darla that in reality Angelus had already been given his soul, meaning he wasn’t just feeling irritated with Spike, but was actually disgusted by his murderous rampage. These are fascinating looks into two vital characters in the Buffyverse, and fleshes out Darla’s history in a way which is essential to knowing Angel’s real history.

5. Salvage/Release/Orpheus/Lies My Parents Told Me 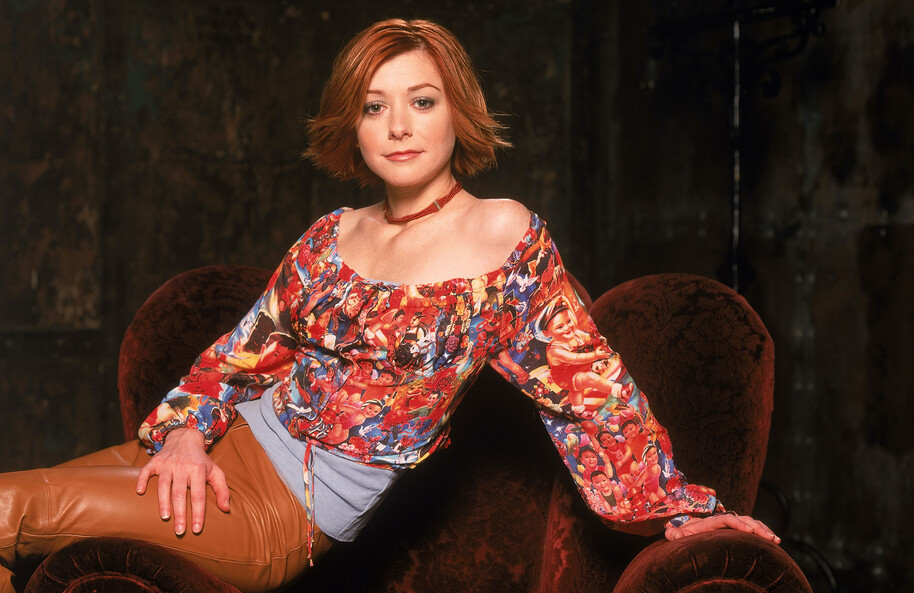 In the episode Salvage (Angel, S4, E13), Faith is attacked in prison by a woman with a knife which we’ve seen used by the Bringers to kill potential slayers over on Buffy. Of course, Faith survives, and is convinced to break out by Wesley, who enlists her help in capturing Angelus (yep, Angel’s evil in this bit – we won’t get into why, it’s not the best story arch, but it gets Faith back in the game so you won’t hear us complaining.) Faith and Angelus battle it out in Release (Angel, S4, E14), leaving Faith in a drug-induced coma (her second coma so far) and Angelus restrained, but still without a soul.

In Lies My Parents Told Me (Buffy, S7, E17), Andrew picks up a call for Willow from someone named Fred. In other words, Fred is reaching out to the only person who has returned Angel’s soul previously. Willow rushes to L.A. to help, which gives fans a fab easter egg where Willow (Alyson Hannigan) gets to interact with her real-life husband Alexis Denisof, who plays Wesley. Willow returns Angel’s soul, and brings Faith back to Sunnydale to help fight The First, making Faith officially one of the good guys again. 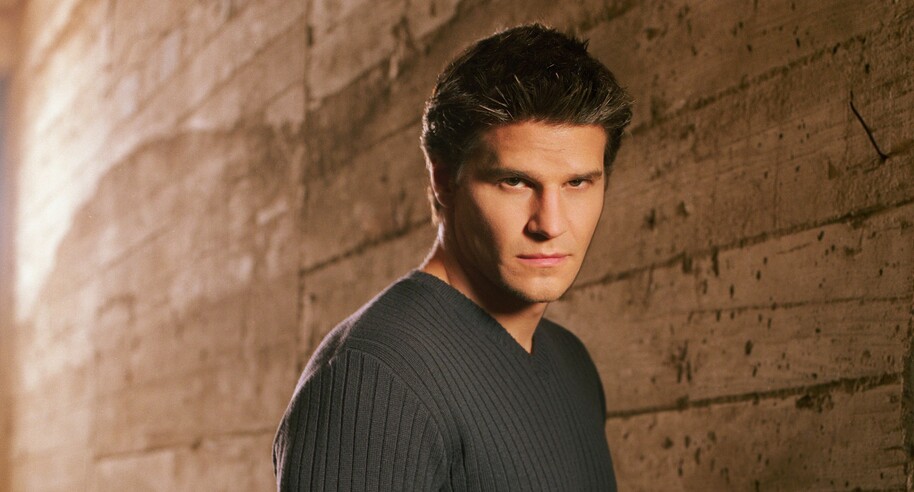 Following Darla’s resurrection, Angel tries to save Darla’s life in The Trial (Angel, S2, E9). Darla survives but remains human, so Wolfram & Hart bring in the fourth member of the old crew – Drusilla – to turn Darla back into a vampire. It was great to see Drusilla again as it’s been a long time since she’d been around, and she succeeds in her task. The two old friends go on a rampage around L.A., feasting on a cellar full of Wolfram & Hart employees. Angel allows this to happen, and then in regret proceeds to fire his entire team, believing they’d never understand or forgive what he’s done.

By Redefinition (Angel, S2, E11), Angel decides to make things right by putting an end to Drusilla’s and Darla’s fun. At the end of the episode he sets the pair on fire in a brutal and surprising scene. However, Dru survives, and takes herself to Sunnydale to reunite with her former love, Spike, in Crush (Buffy, S5, E14). However, she finds Spike a changed man, both in love with Buffy and unable to harm humans due to the military chip in his head. Nonetheless, she tries to return Spike to his old ways. Spike seems to join Druscilla, but ultimately he chooses Buffy’s life over Drusilla’s and offers to kill Drusilla to prove himself to Buffy. If Buffy refuses, he threatens to let Drusilla kill her. Buffy is disgusted by the whole situation. Spike stops Drusilla from harming Buffy, and Drusilla flees, realising the Spike she once knew is gone.

7. The Harsh Light of Day/In The Dark

This one isn’t super exciting, and is mostly another example of Angel flat out refusing to be happy for more noble reasons, but it would be remiss not to mention it. In The Harsh Light of Day (Buffy, S4, E3), Spike (pre-chip) returns to Sunnydale and is on the hunt for something called the Gem of Amara, a jewel which would make the wearer invulnerable. Spike finds the ring the jewel is contained in and blind sights Buffy in daylight. She defeats him with ease and takes the ring, leaving Spike to run back into the sewers. It’s agreed that the ring will be given to Angel, and Oz goes to deliver it. In Angel S1, E3, In The Dark, we see Oz arrive in L.A. with the ring, followed by Spike. Spike tries to torture the location of the gem out of Angel, but this tactic fails and Angel ends up with the ring – which of course, he destroys, because it offered a path to redemption which was too easy. As always, nobility, wins out for Angel.

For all you Buffy and Angel fans out there, we hope this list made for entertaining reading. With Angel coming to E4 from Monday 21st September at 12am, you’ll be able to see the whole story and find out what’s going on in the Buffyverse from both sides – Sunnydale and L.A. If you’re still watching Buffy, check out our list of our favourite Buffy episodes and see if you agree!