We talked to historian and author Bettany Hughes about her epic journey from the coast of Turkey (where the legendary Trojan War took place) all the way to Odysseus' home island of Ithaca.

With such an incredible story at the heart of her journey, A Greek Odyssey with Bettany Hughes delves into the heart of Odysseus, a name meaning epic journey itself, as she voyages Greek islands to discover the truth of these myths and legends. In our epic interview with Bettany Hughes, the historian talks about top holiday destinations, offers great advice for budding historians and gives us an insight into the projects she has planned for the future. 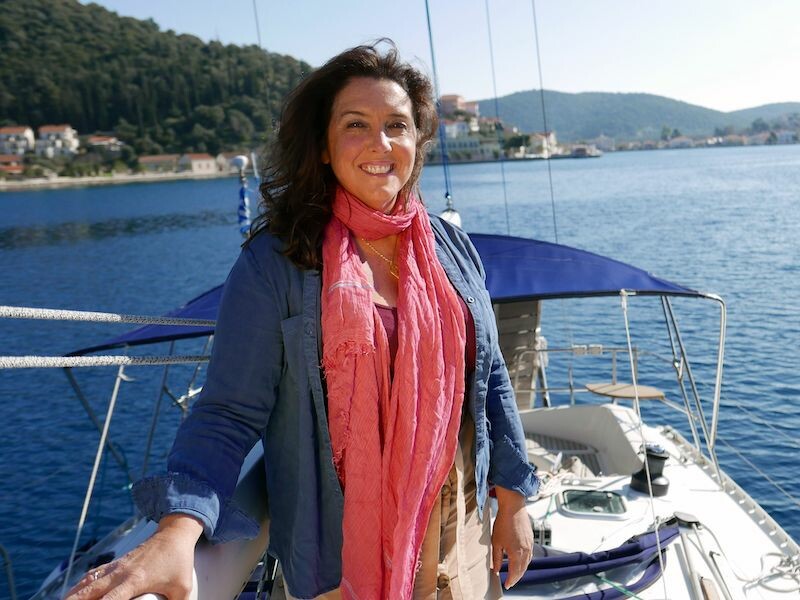 What made you want to follow the journey of Odysseus?

BETTANY: For thirty years I’ve had a love affair with the Greek islands. So much incredible history and myth took place here. And of course the most famous of all was the journey of Odysseus – the legendary Greek warrior who fought in the Trojan war and who then had to make a 10 year journey home facing all kinds of adventures and challenges along the way – monsters, shipwrecks, and women determined to seduce him (for years at a time!). So I’ve longed to follow in his path, and to try to get to the bottom of the truth of these stories – while discovering thrilling history and archaeology of Greece and the Ancient World along the way…

From your experience, what discovery was most important to you, and why?

BETTANY: There were so many! But it was truly incredible to witness my diving colleagues going to the bottom of the sea underneath me and come up with footage of a late-Roman boat, with the contents perfectly intact – even piles of plates still stacked up as if they were just about to be sold! And this was just one of 58 boats they’ve discovered so far in the area! It was also chilling and incredible to see the evidence of virgin sacrifice on Crete – where a young woman, probably a princess, was killed to appease the gods who the Greeks thought had sent an earthquake…this all happened over 3000 years ago!

What was your favourite Greek Myth as a child?

BETTANY: I did love the story of Theseus and the Minotaur – the young hero who travels across the sea to Crete from Athens to rescue young girls and boys like him being fed to the Minotaur – a monstrous creature half man, half bull every year. Theseus has to make his way back through the labyrinth by following a thread left by Princess Ariadne who he later falls in love with – it had everything, danger, horror, love.

Has that answer changed in adulthood?

BETTANY: Its still a great story! And in the series I get to go to the place where it was said to have happened -even to hold ancient seal-stones depicting the labyrinth on them!

BETTANY: So many! When we were caught in one sea-storm I got completely drenched, soaked to the skin, I always carry spare clothes in a bag that goes everywhere with me – so I stripped off behind a fishing net, but as I was getting changed all my clothes – including my pants – were blown off the boat and ended up swallowed by the waves out at sea – I’d like to think maybe they were an offering to the god Poseidon?!

Do you have any other upcoming projects or books in the pipeline that we can look forward to?

BETTANY: I’m writing a new book on the 7 Wonders of the World.

Out of all the places you visited, what would you recommend as a number one holiday destination for:

a. Those looking for a solo adventure
BETTANY: Siphnos or Samos

b. Those looking for some peace and quiet
BETTANY: Ikaria

c. Those looking for places with historical tours
BETTANY: Crete

Do you have any advice for budding historians or students studying Greek Mythology?

BETTANY: As a species we are motivated not by systems but by stories. Stories really matter, so it really matters to investigate the stories that we tell about ourselves. The Greek word for ‘myth’ doesn’t mean a fairytale – ‘muthoi’ are points of information, snippets of evidence from the world – real and imagined – that can help us negotiate our way in the world, and of course they are rip-roaring tales of sex, danger, death, love and life too!

What I love about the myths is that they are universally relevant across time and space – when we were telling these stories on camera making the films – myths about the dangers of being complacent (the Atlantis myth); the greatest human danger being fear of fear itself ( the story of Perseus); the dangers of giving in to temptation ( the Sirens) and the fact that we might not know what challenges are being thrown at us but through wit, will , resilience and collaboration we will survive ( the whole story of the Odyssey!) and that home is where love is - are all so incredibly relevant to us now as we live through this pandemic…

Did you collect any cool historical décor on your epic journey?

BETTANY: Oh yes – as always! I now have a particularly splendid replica necklace of bees collecting honey – like the jewellery worn by women on Crete back in the Bronze Age close on 4000 years ago, I promise I’ll wear it for the next series I do! Plus a beautiful stone sculpture of a boat from Santorini. The Greeks are very good gift-givers!

BETTANY: 100% definitely – I have my bag packed and ready to go! At the end of the Odyssey story we’re told that even though Odysseus was thrilled to be back home with those he loved…he still had itchy feet and was ready to set off on another adventure. I know how he feels!

Don’t forget to tune into A Greek Odyssey with Bettany Hughes on Friday 12th June, 9pm on Channel 5. Find more of our recommendations for new TV shows to watch, and don't forget to sign up to our newsletter to be kept in the know with the latest telly scoops.