ITV have some fantastic, brand-new shows dropping with nothing but great TV hitting your screens. Here’s our top picks of what’s coming up on ITV this week...

OUR TOP PICKS ON ITV THIS WEEK:

I’m a Celebrity...Get Me Out of Here!

Ant and Dec are back with a new group of celebs at Gwrych Castle in North Wales, ready to take on more gruelling challenges and dreaded trials. Here’s who will be entering the castle this year...

Familiar faces from the telly...

Sports stars with their eyes on the prize...

As well as sports and soap stars, plenty of musical talent will be joining too, including:

How do you think the new celebs will fare in the castle? Find out starting this Sunday at 9pm on ITV, and watch every night through the week at the same time.

An Audience with Adele

With the release of 30, her first new album in 6 years, Adele will take to the stage in a one-off concert at the London Palladium to perform new songs as well as her classic hits. With an audience of family, friends, celebs and fans, watch the record-breaking star perform from her most personal and intimate album yet.

The Isis ‘Beatles’: Blood on their Hands

Seven years ago, the world was shocked when propaganda films made by the Islamic State were released showing kidnapped journalists and aid workers brutally executed on camera by members of a British ISIS terror cell named “The Beatles.” In this new documentary, we see families of the victims and officials involved look back at the disturbing and tragic events as two members of “The Beatles” are brought to justice in America.

Jonathan Ross returns for a new season to chat with stars and celebs, including actress Joan Collins, comedian Rob Beckett and more. For celebrity scoops and live music, tune in on Saturday nights on ITV.

Tune into this new documentary series following people from Peckham, giving a glimpse into their lives, relationships, friendships and careers. From Queen Mojo’s body positive fashion to DJ Marc-Ashley hosting a fresh event, watch this slice of life documentary from the streets of South London.

The real housewives of Cheshire are back for a new season of drama, gossip and glamour! Tune in on ITVBe on Monday nights at 9pm.

Billie and Greg: The Family Diaries

In this new reality series, Billie and Greg Shepherd give you a peek into their lives juggling parenthood with their careers and home renovations. Watch on ITVBe on Wednesday nights!

Head to ITV Hub to watch gripping drama starring Downton Abbey’s Joanne Froggatt as Angela, a mum-of-two with a seemingly idyllic life. However, in reality Angela is hiding a secret – her charming husband Olivier is abusive behind closed doors, and when a strange begins following her, things take an even darker turn.

Adapted from Kate London’s novel Post Mortem, this new crime drama follows DPS officer Sarah Collins as she investigates the strange death of a veteran police officer and a teenage girl after they fell from the top of a London tower block.

Don’t miss ITV’s newest crime drama, based on Ann Cleeve’s best-selling novel of the same name and starring Ben Aldridge, Juliet Stevenson and Neil Morrissey. It begins with a body found on a beach in Devon with seemingly no witnesses, forensics or obvious motive. DI Matthew Venn, who is visiting the small town he left behind so long ago for his father’s funeral, is forced to confront his past and dive back into the community as he looks for the culprit behind the shocking crime.

When a ten year old goes missing, two sisters struggle to hold their families together as they begin to suspect their own children may have played a role. Starring Anna Maxwell Martin and Rachael Stirling, this drama is our must-see this week! Find out more about Hollington Drive from the cast and writers.

Gordon Ramsay, Gino D’Acampo and Fred Sirieix are back, and they’re exploring the best of Greece to immerse themselves in the culinary traditions and history of the birthplace of democracy. Starting off in Crete, they’ll enjoy some lobster-diving before taking a dip in Santorini and digging into the traditional sausages of Mykonos.

Set in 1971, Endeavour is worn and weary from the events of 1970, but finds himself in the midst of another high profile murder in Oxford which could have dramatic political consequences as the IRA begins to threaten Oxford.

Series 2 of Manhunt sees Martin Clunes reprise his role as DCI Colin Sutton. Based on true events, the new series follows DCI Sutton investigate a string of sexual assaults and burglaries in South-East London which occurred from 1992 to 2009, sending him on the hunt for one of Britain’s most prolific rapists.

Based on true events, this new drama follows the parents of Stephen Lawrence, a teenage who was murdered in a racially motivated attack in 1993. Thirteen years after his death, Doreen and Neville are still fighting for justice, while DCI Clive Driscoll pushes against his own team as he tries to solve the case. Starring Steve Coogan, Sharlene Whyte and Hugh Quarshie, Stephen is the must-see drama on ITV.

DCI Vera Stanhope (Brenda Blethyn) is back for the 11th season of the celebrated Vera, an iconic British crime drama set in stunning but wild Northumbria.

Starring Ben Miller, Professor T follows a Cambridge professor whose life runs depending on order and stability – but all this changes when he’s asked to assist on criminal cases by an old student. Don’t miss this must-see crime drama every Sunday night on ITV, or watch Professor T on ITV Hub.

Watch this must-see reality dating show on ITV Hub to see the latest batch of singletons step into the villa to find love (or cash their villa romance in at the end of the show!) If you’ve not watched the show everyone’s talking about yet, tune in on ITV Hub.

Another show kicking off its second season this week is Olivia Meets Her Match over on ITVBe. Join Olivia Attwood and her footballer fiancé Bradley Dack as they plan their big wedding, move into a glam new home and celebrate Olivia’s milestone 30th birthday.

Innocent returns for season 2. When Sally, the schoolteacher accused of murdering 16-year-old Matthew Taylor 5 years ago is found not guilty, DCI Mike Braithwaite begins to reinvestigate the case. Watch both seasons of Innocent on ITV Hub.

When a forensic psychiatrist is assigned to work with a woman accused of a shocking crime, she finds herself getting dangerously close with her patient. But is her patient telling the truth about having no memory of her crime, or is she playing a game with the psychiatrist? Watch Too Close on ITV Hub.

Queen Elizabeth II is one of the most famous and recognisable faces in the world. And yet, decades into her reign, her real personality remains largely unknown. In this new documentary series, find out more about the hidden, private life of not Queen Elizabeth II, but Elizabeth Windsor – wife, mother and animal lover. Find out more about the Queen’s real character with unseen home movies, intimate archive footage and rare material from 100+ countries she has visited during her reign.

Fascinated by the royal family? Check out the other royal family documentaries on right now.

No one stays forgotten forever...Unforgotten returns for a whole new season as detectives Cassie Stuart and ‘Sunny’ Khan continue on their mission to solve seemingly unsolveable cold cases. Meanwhile, Cassie struggles with her own personal demons. Find out more about what to expect from season 4 of Unforgotten and and watch Unforgotten seasons 3 and 4 now on ITV Hub.

Starring Keeley Hawes (Bodyguard, Honour), this all-new drama follows Alice, who has just lost her partner of 20 years and father of her daughter in a freak accident in their new dream home. Now, Alice is left to pick up the pieces after his death in this relatable, heartwarming and surprisingly funny drama about grief. Don’t miss the finale this week, and find out more about Finding Alice from the stars and creators themselves and watch Finding Alice on ITV Hub.

Watch if you're in the mood for a new drama - Finding Alice is the perfect combination of light and heavy, the dark humour brightening up the theme of loss and grief. Plus, we have a feeling this is the new drama everyone will be talking about...

Great news for crime lovers - The Bay is back! Season 2 of this breakout crime drama returns to Morecambe as DS Lisa Armstrong and DI Tony Manning investigate a shocking murder at the heart of what seems like a normal, loving family. Watch The Bay now on ITV Hub.

Following Detective Sergeant Marcella Backland as she goes undercover in Belfast to infiltrate an infamous crime family. Find out what other top crime dramas are on right now, and watch Marcella on ITV Hub.

Based on the true story of John Cooper, a serial killer who was able to avoid capture for more than two decades, this new crime drama follows Detective Superintendent Steve Wilkins who decides to reopen two unsolved homicide cases from the 1980s to try and catch the killer and end his reign of terror once and for all. Watch The Pembrokeshire Murders now on the ITV Hub. 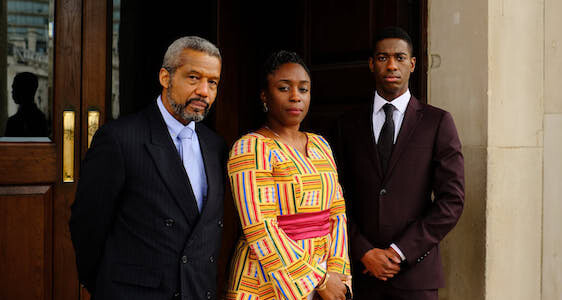